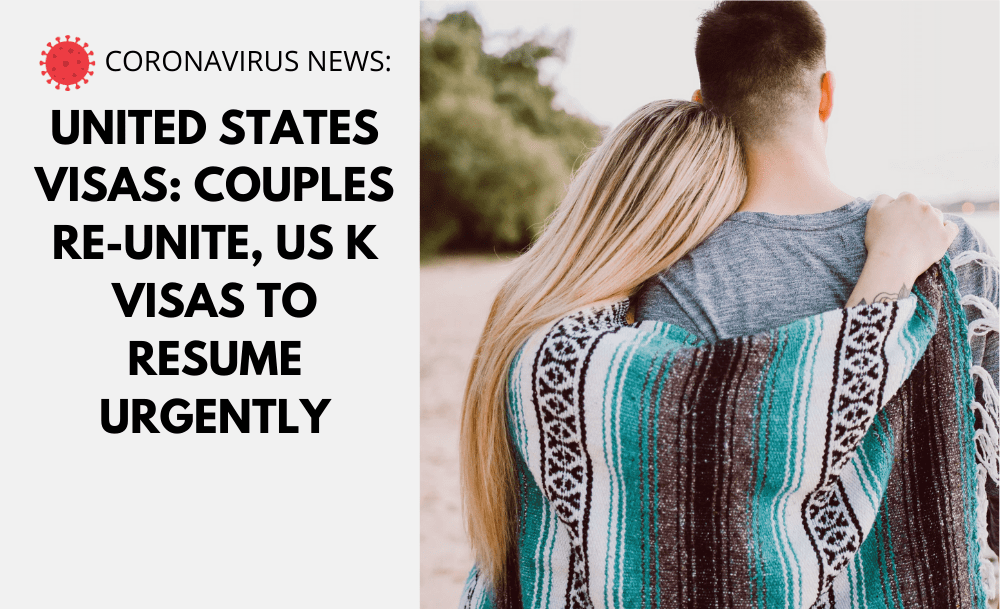 US Resumes Processing K Visas, as a Priority

The United States government has announced that the processing of K visa applications will be resumed with high priority, according to the United States Department of State announcement.

K visas are US visas created for international citizens who are married or plan to marry a citizen of the United States. For those not married, It is referred to as the fiancé(e) K-1 nonimmigrant visa.

The K-1 visa allows the foreign-citizen fiancé(e)s to travel to the United States and marry his or her U.S. national, or Lawful Permanent Resident (LPRs), within 90 days of arrival.

The foreign-citizen can then apply for adjustment of status to a permanent resident (LPR) with the Department of Homeland Security (DHS), U.S. Citizenship and Immigration Services (USCIS).

Because a fiancé(e) visa permits the holder to immigrate to the U.S.U.S.U.S. and marry a U.S. citizen shortly after arrival in the United States, the fiancé(e) must meet some of the requirements of an immigrant visa.

Because of the Coronavirus pandemic, the processing of US K visas was temporarily suspended since mid-March. Visa services were planned to resume on 15 July, but that was postponed with no further news until now. The new statement from the US Department of State has revealed that since August 28, consular operations have begun to be resumed.

Effective August 28, as it becomes safe to resume more consular operations at each US mission, posts are authorized to give K visa cases a high priority.

The United States President, Donald Trump issued the Presidential Proclamation 9996, on March 14, which permitted only a limited number of internationals to travel to the United States, in an effort to stop the spread of the pandemic Coronavirus.

This led to the US closing embassies and consulates abroad as officials were permitted to leave their posts and return to the US.

The result was a suspension of visa processing worldwide, one of the consequences being that America faced a shortage of international doctors.

Since then, the US has started re-opening embassies and consulates and resuming visa processing operations, with limited visa types being permitted.

The new announcement of the Department of State also clarifies the process of the applications which have been subject to the temporary suspension of visa’s processing.

The I-129F Petition for Alien Fiancé (e) is typically valid for four months; however, consular officers may revalidate the I-129F petition in four-month increments.

The K-1 visa is for overseas national fiancés to enable them to temporarily enter the US for the purpose to marry their petitioning, US citizen fiancé.

K-2 visas permit overseas national fiancés to bring your children with you into the United States.

But, the applicant must be aware that both K-1 and K-2 visas have specific requirements and guidelines, which must be seen.

K-3 & K-4 visas are for entering the U.S. to apply for lawful permanent resident status.

Love is Essential and Love is Not Tourism

Since the global coronavirus pandemic hit, couples have not seen each other for months since the travel bans were put in place in March.

The issue has gained traction on social media using #LoveIsNotTourism and #LoveIsEssential as couples share their plight and a movement grows asking governments worldwide to ease restrictions for couples.

Couples are also being prevented from seeing the births of their children and missing weddings.

According to the Love Is Not Tourism group, the issue impacts approximately 9,000 EU citizens and residents alone.

The temporary suspension of K visas has left a bigger share of couples with US citizens, or permanent residents, separated from their foreign partners & spouses, while they sought help from authorities to reunite with their loved ones.

We have seen US nationals married to south American spouses unable to reunite during this global pandemic whilst reporting on the issue.

What are your thoughts on the US’s travel ban and resumption of K visa applications?

If you are a person that has been particularly affected by it and have had to stay out of the US all this time, we will like to hear from you. Comment below.